"You can either get HELP or compete against students who do!" 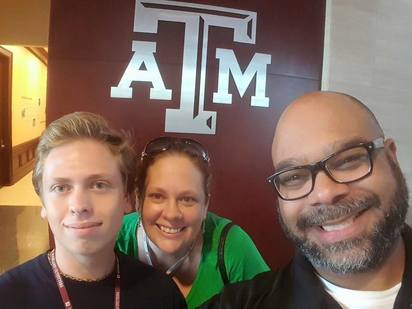 “Why HELP should invest in Phillip Gibbs participation in Texas A&M’s T-Camp?”

First a little background. At a young age my family was separated, and since that day I have been striving to learn, to develop, and to grow so that I can improve my life, making it better for the future to one day help my family grow.

Now fast-forward to the future, at the beginning of high school, well the first out of five I attended, I began accelerating; taking any and all pre-AP and advanced courses, putting myself in academic competition, and reaching out and developing friendships that I still have today. While pursuing what I thought to be my dream of becoming an architect, I wound up in the robotics club. I took to robotics like a fish to water. I competed in engineering and design competitions, receiving medals for CAD and graphic design work. Working late with the President and Sponsors of the club, we took the team to State in the BEST Robotics Competition, for the first time ever. Meanwhile I enrolled in the High School Aerospace Scholars program
with NASA. This involved online research about the history and activities of NASA and ended with a summer event at Johnson Space Center. At the Johnson Space Center I participated as a part of group against other HAS members building a plan for a mission to mars. We then presented the mission to a panel of professionals and were judged, my team won the competition. As the next president of the robotics club I unfortunately had to move. However, I did not let
moving stop me from learning and growing.

As a senior in a new school I was hesitant at first, but I escaped my comfort zone and explored new possibilities. With minimal knowledge I joined the Solar Car Team. We had nine months to design and fabricate the chassis for the new solar powered car; while improving the design of the solar powered car that we will race at Texas Motor Speedway the week of July 20th
.
In addition to learning the ins and outs of a working car I also joined the Key Club, dedicated to community service; and participated in many events, including the Pen Ponder Halloween Festival where we helped to run booths for local children. I was also accepted into National Honor Society despite being a new student and won A Rising Star of Texas Award from Ben Barber Career Technical Academy for outstanding performance.

Reading what other people had to say about Fish camp, they all had one thing in common; FAMILY. Mr. Ed, by investing in me you are expanding the Aggie family while inspiring me to do the same. To put it frankly Mr. Ed, this is the hardest paper I have ever had to write; calling to question many things including my own worth. However, I have come to realize that by talking to me and believing in me you are inviting me to be in your family, helping me to realize my full potential, and by that means bettering yourself as well. By giving to me you are expanding your
future family that I as an Aggie, who will one day not only get “to”, but “through” Texas A&M, will one day invest in a future Aggie, just as you have invested in me.

"You can either get HELP or compete against students who do!"

Contact HELP at help@helpconsulting.org or call 301.803.0100 to book us for an event or for more information about our services!